You are invited to attend and celebrate with us as we venerate a first-class relic of St. Peregrine Laziosi, patron saint of cancer. This will occur on the 4th Saturday of each month at our 4pm Vigil mass. We will expose the Blessed Sacrament, offer the sacrament of the Anointing of the Sick, provide an opportunity for each person to receive a blessing with the relic and conclude with Benediction.

Saint Peregrine Laziosi was born of a wealthy family at Forli, Italy, in 1260. In his youth, Peregrine was active in politics. During one of the uprisings he attended, Peregrine struck the Papal representative Saint Philip Benizi in the face. When Saint Philip offered the other cheek, Peregrine was so overcome that he repented, converted to Catholicism, and joined the Servite Religious Order. Later in life, this outstanding priest and confessor was afflicted with cancer of the foot. His doctors decided that amputation would be the course of treatment. Peregrine spent the night before the operation, in prayer asking for the wisdom and strength to accept whatever God willed. That morning he was completely cured. This miracle caused his reputation to become widespread. He died in 1345 at the age of eighty-five, and was canonized by Pope Benedict XIII in 1726. He would become the Patron Saint of Cancer Patients, foot ailments and incurable diseases.

The St. Peregrine Novena can be found at https://www.praymorenovenas.com/st-peregrine-novena

Here is a prayer of intercession to St. Peregrine from the catholic.org 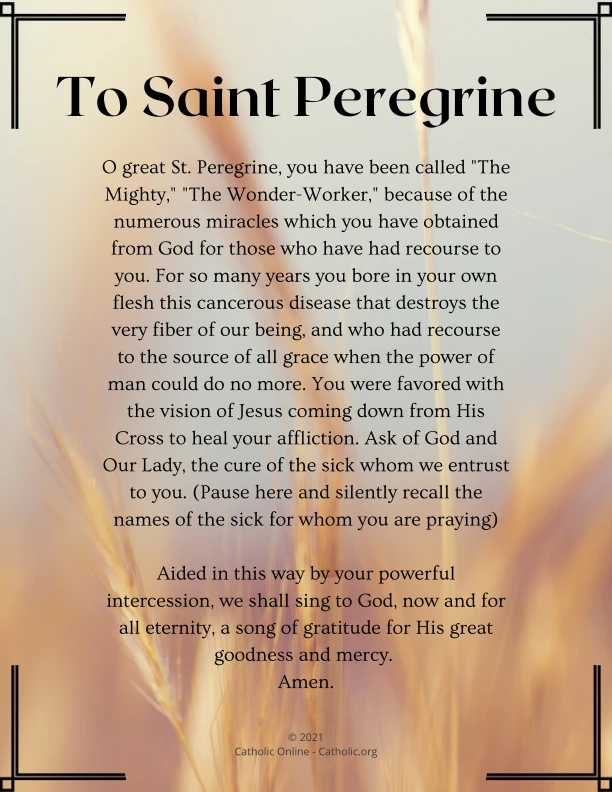